With the Premier League coming to a close and 2 of the 3 relegated teams known, I thought it’d be a good time to look at the possible teams able to join the Premier League for the 2013-2014 campaign. Opposite of the Premier League 2 of the 3 teams up for promotion are known, having clinched automatic promotion. The 3rd spot will come from the Championship playoff consisting of the 3rd through 6 place sides. This year marks added importance for the clubs as extra tv revenue means more money payed out to each team, which will be a huge advantage for the 3 sides that are promoted. I have shown each team and given a little history of each club. Without further adieu, here are the 6 clubs. 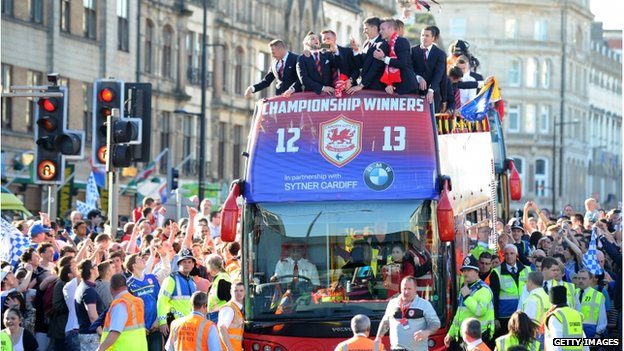 Cardiff fans come out in droves near Cardiff Bay to celebrate the teams promotion.

Cardiff City have finally made their way to the Premier League after so many years of failing in the playoffs. (last 3 seasons) The Bluebirds fans had to star believing they were destine for always being the brides mate after so many years of getting so close but falling. The worst had to be the heartbreaking 2010 campaign where they made it to the Playoff final, but fell to Blackpool. Last season they were outclassed by playoff winners West Ham United 5-0 in the semis.  This year, manager Malky Mackay made sure the Welsh side would join their Welsh brethren Swansea in the Premier League winning the league by a comfortable 9 points.

Hull City marked their return to the Premier League with a crazy set of circumstances. Taking on League Champions Cardiff and up 2-1 late, the Tigers earned a penalty and the crowd went crazy seeing the penalty as a clincher of their promotion. Fate wasn’t on their side however as Hull missed and Cardiff went down and earned a penalty of their own, scoring and making it a 2-2 final and leaving Hull up to the mercy of Leeds and Watford as a Watford win would put them into 2nd place and Hull into the playoff. Fortunately for the Tigers and their supporters fate finally joined them as Ross McCormack of Leeds earned the love of the Hull City faithful knocking in a 90’ minute goal that gave Leeds the victory over Watford and Hull the safety of 2nd place and automatic promotion into next seasons Premier League.

Hull City were led this season by former Sunderland and West Brom boss Steve Bruce and by long-time top player forward Robert Koren who once against showed good form in leading the team to the Premier League. Former Arsenal youth Jay Simpson who like Koren has been with the club since 2010 was also an important player for Hull and should be a part of the Premier League squad.  Captain Jack Hobbs was also solid in the back half for the club.

Playoff teams (1 of 4 will qualify)

Lead by former Italy forward and former West Ham boss Gianfranco Zola, the Hornets nearly capitalized on Hull’s result but unfortunately came up short, finish 2 points back of Hull for the automatic promotion. They will take on 6th place Leicester City on May 9 in Leicester and on Sunday in Watford for the right to go to Wembley for the final and last spot in the Premier League.

Nigel Pearson joined the club in 2011 for his second stint as team boss, leaving Hull City after requesting the club let him join Leicester. In his first stint with the Foxes Pearson led the Foxes to the Championship winning League One in 2009. He hopes to lead the club back to the Premiership after their 2000’s fall from the top.

The Seagulls must beat their rivals, Crystal Palace if they want to advance to Wembley and have a chance at the Premier League. In 2011, they moved into Falmer Stadium a 30,000+ seat Premier League quality stadium and now hope to have a Premier League club there. The team has had an up and down past, nearly being shut down in the late 90’s after nearly falling out of the football league. They seem to have a bright future ahead and if they don’t win the playoff this year will be a top bet to be one of the 3 next season.

Palace have one of my favorite managers in Ian Holloway who last led Blackpool as he almost led the seasiders to a 2nd year of Premier League football, but wasn’t able to keep them up. He joined Crystal Palace in November 2012 taking over for cartaker manager Curtis Fleming. Holloway did a good job to lead the Eagles to the playoffs and another shot at the Premier League. Palace themselves have spend the majority of their recent seasons in the second divisions but for must of the past 40 years have been one of the yo-yo clubs that make Top division visits quite often. Since joining The Football League Palace have spent 13 years in the top flight of English football.

Crystal and Brighton matches will take place on the 10th and 13th.

View all articles by Elizabeth Anderson